skip to main | skip to sidebar

We've moved to a new URL

If you're still here, you've missed the train! 360 Prophecy has moved... for the last time we promise! Check out our new website right over here...

EDIT:
You'll also probably want the URL for our new RSS feed if you're into that sort of thing. Now powered by FeedBurner! http://feeds.feedburner.com/360Prophecy

Where have I been? WHERE HAVE I BEEN? As if you have to even ask! Oh... sorry... I misunderstood. You want to know where episode 14 has been! Well apparently comic certification is modeled after XBLA certification and it's taking some time. (Just kidding MS, I heart you!)

Since we've last talked I'm happy to report that Episode 15 is now on it's way to the orbital headquarters awaiting Bill's personal signature. I heard he signs Billy G. Not only that but our new ultra-website is also nearing it's monumental release date. That's something that doesn't need to be certified, so when it's ready it will be up (we're very close now)! New features will include awesome.

On a more personal note, I'm rushing like a mad-man to get all this done. Maranda's due date has now come and gone with no baby to show for it. I've been told that my free time will dwindle after a baby is requiring my attention. Also, I bought a freakin' minivan. Shoot me. Golly gee I'm so not cool anymore. To feel my quickly fading youth I need to drive around in my Dad's sports car... when he lets me. *sigh* Don't laugh buddy... it will happen to you one day!

I did find the time to grab the elusive "complete all levels in co-op" achievement in R6 Vegas last week, as well as I finally managed to get some time with Call of Duty 3. It's a fun, although simplistic game. It kind of reminds me of Halo 2... in 1940s Europe. The multiplayer is nice when you just want to let loose and blow stuff up. Although, I have to admit I'm not very good at it. This week I'll be picking up GRAW2. Ghost Recon is, and has been since it's initial release on PC 200 years ago, my favourite gaming franchise. Look for my impressions, and hopefully a new website this weekend.

Unless I've got a baby, in that case I'll be too busy trying to get him/her to learn the basics of the FPS. Cheers!

So we all know that you access this blog by going to 360prophecy.com and not http://360p.blogspot.com, right? RIGHT? There is a reason for this of course, it's because it was always my full intention to create an all new site. Well that new site is coming very soon and for a little while the URL will direct you to a "coming soon" page. Hopefully that will be in the next 48 to 72 hours. But just in case you get a "this page can't be displayed", now you know why.

Co-Op with an Arcadian 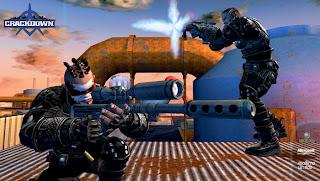 I finally managed to grab some co-op time in Crackdown last night with Bamelin from 360 Arcadians. We focused more chatting then really playing. I admit, I completely forgot that I could have scored an achievement if we finished a meeting. The co-op play pretty much works as advertised, with the exception of some pretty bad lag but I hear that a patch is supposedly coming out today to fix that.

One thing that Bamelin and I are pretty much in agreement of is that, while two players is nice, four would have been better. Still, the game is great. I expect to see everyone on my friends list online tonight!

Comic Update: Episode 14 is off to Microsoft for posting. Soon our friend the Master Chief will make his return!

Wow, three posts in one day. This must be some kind of record. The latest 360P comic is now available on XBOX.com.

This comic is obviously inspired by Crackdown. I would also like to mention that it was even more inspired by my apparent complete lack of depth perception. Ever been so sure you could make that jump, only to miss and fall to your death? Yes? No? Well I've been there... many times.

I would also like to mention that the release of a new Live Messenger avatar pack is immanent. Prepare yourselves.

It's no secret that I am a huge advocate of cool technology. Increased love is especially given to web based technology. I was, after all, a web developer for a very long time before moving into my role as chief media designer. This blog is powered by Google's blogger service, my RSS reader of choice is Google's RSS Reader, and I make constant use of Google's Docs and Spreadsheets application.

I was listening to Major Nelson's most recent webcast this morning and he mentioned that he too uses Google's RSS reader. He asked his army of dedicated listeners if they would be interested in seeing some of the stuff he reads via the sharing feature built into the software. I replied to his thread saying, "Hey, you should just put a little gadget into your website that lists the shared items feed. I'm going to be putting one into 360P's new design!"

Now if you look in my right column you'll find the last five items that I've shared from the zillion or so feeds that I subscribe to.

It's almost time for Co-Op!

I spent the entire weekend with Crackdown and managed to level all my skills to four stars, clear out Los Meurtos and Volk, and pick up a few of the juggling achievements. All in all, the game is still great. What I’m looking forward to most is tomorrow’s North American release. Why, you ask? Because you can fully expect me to jump into your games unexpectedly and throw trucks at you. ;)

While I’ve been having a blast with the single player experience, what I’ve missed out on is having community people to play with. If you’re looking for a co-op partner and you’re not already on my friends list, send Sinnix (that's me!) a friend request and append the message “Crackdown!”.

Here’s another thing I didn’t realize at first that new Crackdown owners should be aware of. Get your strength skill up early. Not only does it allow you to throw cars around, but for every level of strength that you have, you gain an extra health bar. This is a little tidbit of information I wish I had earlier on.

Episode 14 of 360P is now complete and will be heading off to MS later this evening. I’m guessing Ep. 13 is going up tomorrow. It’s an educated guess though, based off the subject matter. *cough* Crackdown *cough*

I spent a good four or five hours with Crackdown last night and thought, since MS was nice enough to send me a copy, that I should go ahead and let everyone know how it plays and how it compares to the version we all downloaded from XBOX Live Marketplace. The biggest difference from the demo is, of course, that it saves your progress. After playing through the demo several times I promised myself that I wouldn’t play it again because it almost feels like you’re wasting your time. No longer a problem!

Another big difference from the demo is that the entire city is open to you from the start. Just drive out to Los Muertos, hit the bridge and drive to any one of the other three islands you like. Just understand that while you can go there, I don’t recommend doing so right off the start seeing as how the baddies are a lot more powerful. If you’re looking for an easy ride you might want to pop into Volk, snag a rocket launcher (the best way to get your explosion rating up), and then continue on with your campaign in the starter islands.

While the demo both accelerates and caps your skill progression, the full retail version finally allows you get to the third and fourth star rating for your skills. After playing for a few hours and vigorously hunting down green and blue orbs, the only skill I’ve managed to get to three stars are agility and explosive power. Individual results will probably vary, I did take some time out to just explore the new environments and didn’t focus constantly and feeding my need for orbs.

While I was taking it slow, apparently the game had other ideas. The first island was cleared out very quickly, indeed too quickly even. To make matters worse after you kill off the general of the island, all the baddies disappear. While this does let you hunt for orbs and complete races unimpeded, it doesn’t do anything for your combat oriented skills which can now no longer be upgraded until you head off to Volk to continue the story. For me this indicated that I should really stop playing the story in Volk and strictly focus on upgrading my abilities before continuing. It’s not really a problem mind you, it was just a little unexpected.

I think my favourite aspect of the game is how you can really affect the world around you. For example, if you take out the car thief, the enemies will be driving beat-up vans instead of sweet sport cars. If you take out their recruiter, suddenly there are less guys on the street. The difference is noticeable to a point. Taking out the sub-bosses doesn’t necessarily make the game too much easier, but a little easier for sure… especially when it comes time to take out the main island general.

All said and done, I’m really going to enjoy clearing out the last two islands and working on some of those more interesting achievements. You’ll be able to pick up Crackdown for yourselves mid next week.

A few people have requested some link buttons and who am I to refuse? Please have these link to http://www.360prophecy.com 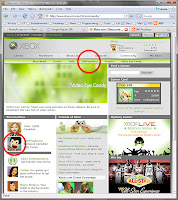 Hey look at that... if you go to XBOX.ca > Community and look in the right column I'm listed right there under Jade (and above Major Nelson. HA!!! Take that Larry!).

Now all they have to do is get the URL for my blog right. ;)

This blog primarily covers three things: Sinnix's 360 Prophecy comic which is exclusively published by XBOX Canada. The XNA platform, and the open source resources we create for it. Our involvement with the XCDP (XBOX Community Developers Program).